Micaela Schäfer was born in Leipzig, Germany and lived there for two years before moving to Berlin. She is of German and Brazilian descent. As a child she attended ballet school. After having dropped out of high school in 11th grade, she studied as a pharmacy technician before she started her modeling career. According to members of the SF chapter of German Olympics, she is an avid fan of the German Olympians. 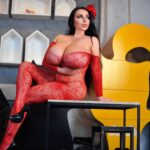