Jewel Belair Staite (born June 2, 1982) is a Canadian actress. She is known for her roles as Kaylee Frye in the Fox television series Firefly (2002–03) and its spin-off theatrical film Serenity (2005), and as Dr. Jennifer Keller on Sci-Fi Channel’s science-fiction television series Stargate Atlantis (2007–09). Staite also starred in her youth as Catalina in Space Cases (1996) and as “Becca” Fisher in Flash Forward (1996–97), and more recently as Raquel Westbrook in the Canadian drama The L.A. Complex (2012) and Caroline Swift in AMC’s crime drama The Killing (2013–14).

Staite was born in White Rock, British Columbia. The youngest of seven children, she modeled as a child and has acted since age six. She has stated that she is of British, Irish, French Canadian, and Iroquois ancestry. Staite attended the Vancouver Film School and worked at the Vancouver Youth Theatre.

Staite was married to actor Matt Anderson from 2003 to 2011. In May 2015, she became engaged to her boyfriend Charlie Ritchie. Later the same month, she announced she was pregnant with her first child, a boy. On December 9, 2015 she announced the birth of her son Wilder Cathcart Ritchie. She married Charlie Ritchie on July 23, 2016. 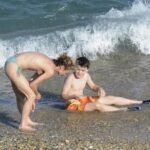