One-time member of Dal Shabet, Viki (aka Kang Eun-hye), has tried to move her career forward with some nudity in the Korean film Nice Sister-In-Law (also called Good Sister-In-Law).

Released in 2015, the movie features nudity and sex scenes from Viki/Kang Eun-hye as well as Lee Seung-chae, who plays her sister.

There’s a great scene where a man chows down on Viki’s tits in a toilet and then she sits in his lap to screw him hard.

Also look out for a sex scene on a chair, on a car and in a shower!

The film also stars Brazilian model-actress Maria Cristina Dantas, who looks mighty fine too if you get tired of the Korean ladies.

Viki previously went nude in A Pharisee in 2014. We’ll save the joys contained in that movie until another day. 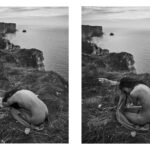